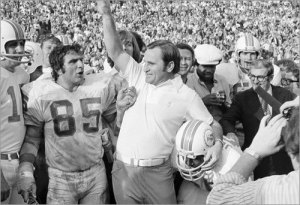 Perfection.  It’s the goal that any of us, athlete or not, ultimately aim for every time we take one more shot, one more revision or one more dry run.   As true competitors, we might say “nobody’s perfect” to console those who have thrown in the towel or have accepted complacency, but inside we believe it is still attainable.  If we work harder and longer and want it more, we might just taste perfection if at least for a fleeting moment.  And it is that ephemeral nature of perfection that makes it forever the goal.  Even when you reach it, for a play, a game or a season, it is but a brief celebration before it moves on and is again beckoning you to chase it.

However, in the National Football League, somehow perfection has lived on for decades.  Although it may be more of a “face” to an intangible concept (perfection), The Perfect Season continues to be the pinnacle of success for any NFL team, or any sports team in general for that matter.

It was the Perfect blueprint for a team.  A head coach that had a career .760 winning percentage to-date, had already been to three Super Bowls and had the perfect mix of experience, knowledge and hunger to chase perfection as he had one too many close encounters with it without coming out on top (two seasons with 1 loss and three Super Bowl losses).   A power running game led by the perfect complement of a tougher-than-you pile driver (Larry Csonka) and faster-than-you sprinter (Mercury Morris) that just so happened to be peaking at the same time.  A young and talented quarterback that had excelled at the college level and was driven to be even better as pro.   An equally talented, but much less heralded back-up quarterback that was claimed off waivers for $100, but stepped in after Week 5 in 1972 and never lost a beat…or a game. A defense where every man on the field valued assignments, tight coverage and defensive stands over any stat sheet, highlight reel or newspaper shout-out.  This sentiment was further highlighted by the only “name” that they would allow the media to use or hype – the “No Name Defense.”

However, even with all the perfect pieces perfectly aligned, a perfect team they are not.  It takes more than that.   More than just stats or talent or experience or knowledge or even luck.  More than just showing up on game-day.  More than practicing every day or just executing when you’re instructed to do so.  Perfection requires a commitment.  A commitment to the pursuit, no matter what.  A resistance to complacency.  A delicate balance between satisfaction in what has been accomplished to-date and a rejection that those accomplishments are “good enough” to stop.  The focus to concentrate on the road ahead rather than dwell too long in the success of the past. The hunger to get better even if everyone tells you that you’re the best.  The Drive to ask yourself for more even when others might be satisfied.

Each and every player on that 1972 Miami Dolphins team had it – the focus, the hunger and the drive. And, together, these men awoke every day that season chasing the same thing that you and I pursue now and they came out victorious. Perfection.  Who says “nobody’s perfect?” I say keep on keeping on and you just might taste perfection yourself one day.

Thanks for checking out the Daily Driver post on “The Drive.”  Come back every day for daily quotes, pictures, people or moments that we hope can provide inspiration or motivation in your life. Or follow us on Twitter @TheDriveSports and look for #DailyDriver to get your daily dose of inner fire!