As you may or may not have known, The Drive’s two writers (Dan and Jon) got the unique and thrilling opportunity to spend the weekend in Atlanta for the Men’s NCAA Basketball Final Four and experienced three fantastic basketball games. Even though we weren’t able to cheer for any of our alma maters (so the stress level was at a minimum), it was still pretty amazing just to be a part of such an awesome sporting event – if you haven’t gotten the chance to go to a Final Four, please do, as the energy and excitement and atmosphere couldn’t be beat. In fact, we remarked to each other that we thought the environment at the Final Four (probably much like the BCS Championship game) was actually better than anything we had or would experience at any professional sport event. Okay, so the Super Bowl is often looked at as the pinnacle of sporting events, but I’d contend that the average level of fan’s passion and support for their team was significantly higher in Atlanta. Cheering for your favorite professional team is one thing – yeh, you might have grown up watching them or “went to a few home games” but you have to admit that the “brand” can be watered down by bandwagon fans, fair-weather fans and “this is a cool looking hat” fans. But in college sports, there’s less watering down and there’s more die-hard commitment. These people spent years at the university, have memories recalled each time they hear their school’s fight song or rally cry and camaraderie that stretches generations as school experiences automatically connect total strangers. Needless to say, it was a sports environment that one can only adore as a true sports fan. And to recap all that went right (and wrong), we figured we would provide a Top 5 and a “NOT” Top 5 (in true SportsCenter fashion) moments from the weekend in Atlanta…

The Drive’s NOT Top Five: 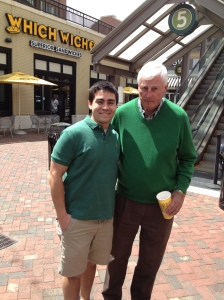