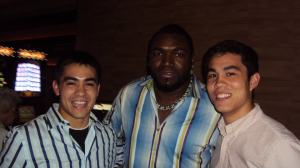 Ok so let’s make this clear right from the start – I despise the Red Sox.  Everything about them from their stupid “playoff beards” to their poorly designed field to Pedro Martinez (enough said).  But it’s not because of their championships, not because of their beards or their field.   It’s because I have Yankee pinstripes coursing through my veins and have learned since birth to scorn those folks from Fenway.   However, it is a very special kind of hatred that has many layers and elements to it.   It is the type of sports hatred that only develops between the most bitter of sports rivals.  It is an odd mixture of total animosity and yet utmost respect that exists between the players, the organizations and their most die-hard of fans.  It is the thing that so strongly and starkly divides these two teams and their fan bases for the past 100+ years.  And yet, it is also the same thing that unites them together as one to preserve and press on through the toughest of times.  Boston stood by New York in 2001 as we all tried to recover from the tragic events on September 11th.  And New York provided support and strength to their Boston brethren in the wake of the Boston Marathon bombings.  Thus, it is out of this complicated and complex relationship that I write this post.

I want to sincerely congratulate and commend the Boston Red Sox on their World Series victory on Wednesday night.  Their pitching performances throughout the post-season from starter to closer were masterful and they absolutely deserved the champagne celebration at the end of it all.   However, that’s not why I smiled when I saw the final pitch from Uehara pop into David Ross’ glove to end Game 6.   I smiled because this team of Boston players knew they had something bigger to play for, something bigger to show themselves, their fans and their city.  The “Boston Strong” emblem on the Green Monster said it all.   They were giving their all for city and a nation whose hearts were broken and dreams darkened one fateful day in April.   They had the opportunity to provide these people something that they might have lost or continued to doubt since the days of that tragic event: hope.   Often wins and championships in sports are about the skill and determination and triumph of the players on the field and are rightfully celebrated as reaching the top level of achievement.   But some wins and championships mean so much more.   This was one of them and every Red Sox player knew it.  John Lackey spoke about it immediately after the game.  Dustin Pedroia talked about it too.   But the person that really brought it home for the team, the fans and the city was Mr. Big Papi himself, David Ortiz.

On the field, Papi was a one-man offensive juggernaut in the World Series batting an absurd .688 with 2 home runs, 6 RBIs, got on base 19 times in 25 plate appearances all the way to grabbing the championship trophy and a World Series MVP.   He had an unmatched intensity level that he used to lift the Red Sox (and the city of Boston) on his back for a championship push.  He also had his trademark smile and kid-like enthusiasm for the game that kept his teammates and the fans at ease even if the biggest of moments.  All great stuff, all things that championship players do.   But that’s not why I’m here to applaud David Ortiz.

I’m here to say that his actions off the field, his courage to step up and embrace his role as a Ieader within the Boston community, are the kinds of things that are so rare amongst sports stars today and are why I cheer for David Ortiz (even as a Yankees fan).  He understood that he could be something more than just a collection of talent and statistics.  He recognized that with success comes opportunity, but also comes responsibility and it is up to you to own that and be not just a star, but a role model and a leader.   He stood up and delivered a passionate, heartfelt and inspiring (albeit PG-13 rated) speech to his fans and his city as they stood in an aftermath of despair a week after the Boston Marathon bombings.   He rallied them with his words to recover and persevere and he showed them how to triumph with his bat.    So congrats David Ortiz for helping the Boston Red Sox bring home not just a trophy, but a feeling of hope that they so badly needed and deserved.

Thanks for checking out “The Drive.”  Come back weekly for more articles on sports’ critical role in society, more cases analyzing the sports landscape and more quotes, pictures, people or moments that we hope can provide inspiration or motivation in your life.  You can also follow us on Twitter (@TheDriveSports) or on Facebook (The Drive)!