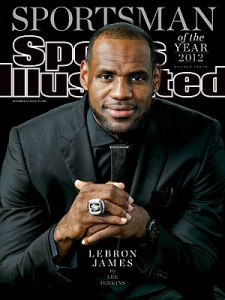 As sports media continues to expand across the globe and athletes begin to get press coverage and sponsorship offers before they even graduate high school, the future earnings potential for sports superstars and their “brand” has exploded.  However, this increased accessibility and visibility also means more scrutiny and brand sensitivity, requiring athletes to be ever more careful and calculated with their actions both on and off the field.  One poorly worded comment or one controversial picture can be spread around the world through social media outlets in a matter of minutes and an athletes brand is tarnished just as quickly. Recognizing the changing context of the industry, Lebron James decided in 2005 to pursue a different route in building and monetizing his “brand.”  Instead of following most athletes and contracting with a major international sports agency like IMG, James elected to create his own firm (LRMR) and hire his childhood friend as CEO to handle all of his business ventures and marketing activities.

This new approach to personal brand management has changed the structure of athlete representation from negotiations with middlemen (i.e. sports agents) to close personal partnerships with end firms and, in doing so, has shifted the balance of power within the industry.  It also has initiated a shift in the configuration of sponsorship deals from the traditional fixed-price, fixed-year contracts to revenue-sharing or equity contracts where athletes are given a stake in a company’s future profitability in return for their endorsement.  When taken together, these factors have enabled James and LRMR to change how an athlete can create and capture value.  Furthermore, several other athletes like tennis star Andy Murray have realized this shift in power and are now looking to create their own personal agency instead of pursuing representation at a major firm.  If this shift gathers additional momentum, it may change the overall landscape of athlete representation and distribution of sponsorship profits.

There are two major strategic reasons why Lebron James decided to forego representation from a major agency and create his own personal marketing firm to further maximize his current and future profits.   The first was James’ belief that vertical integration (i.e. bringing representation “in-house”) could provide him with specific advantages that he could not get from a traditional contract with an agency.  One advantage is the avoidance of unnecessary mark-ups to massive sports agencies like IMG who typically use their supplier power to redirect profits away from individual athletes.  Another is the added protection against misaligned incentives between an individual player and agency.  For instance, an agency may choose ventures purely based on short-term profitability and disregard a player’s personal interests, values or long-term brand equity.  As James’ friend and LRMR CEO Maverick Carter puts it “They [agencies] would sell Lebron like they would sell mattresses!  They go like, ‘We have six slots for endorsement deals – hurry up before we run out.’ Consumers figure this out.  They know it isn’t real.”  Although this may seem irrational or short-sighted by the major agency given their ongoing relationship with an athlete like James, the agencies have been able to retain starts because of the massive amount of buyer power they have amassed through a diverse portfolio of international partnerships and other star athletes.  The only way these agencies might change is when they begin to lose bargaining power and must fight harder to retain their stars.  Finally, James’ believes that the creation of LRMR will ultimately generate additional profits in the long-run as this vertically integrated structure provides full foreclosure of the Lebron James brand as no company or agency will have access to his brand unless they go through LRMR.  However, the downsides to bringing this function “in-house” cannot be overlooked — in LRMR, James is  electing to go with a substantial reduction in agent talent (his friend vs. an agent with 15-20+ years of experience) and a limited portfolio both of which  could leave him at risk to unfavorable contract terms, acute market fluctuations (e.g. he gets hurt for an entire season) and challenges in any sponsorship contract re-negotiations.

The second strategic reason for James’ creation of LRMR was for the restructuring of sponsorship contracts so that he could capture more of his added value in the near term and over time.  As athletes like James are becoming more aware of the long-term profits that can gleaned through effective management and expansion of their brand, they have started to make shifts in the share of value capture within sponsorship deals. Traditionally, these sponsorship agreements between athletes and firms have been structured much like licensing – a fixed price, fixed year contract where the athlete essentially licenses themselves and their brand for the firm to use to promote their product/service.   It is a model that has proven incredibly lucrative for both parties involved.  However, the distribution of value capture in these scenarios has often been skewed significantly toward the firms doing the sponsoring even though it is often the athlete whom has the greater added value.  For example, although Michael Jordan’s sponsorship with Nike earned him millions, his product line has yielded Nike billions in revenue every year and he only gets access to a very small portion of those profits.   Superstars like Lebron James have taken notice and realized they (and their brand) provide a much large portion of added value to a given sponsorship agreement than the firm involved.

As a result, athletes like James are beginning to ask for a revenue-sharing or equity stake as part of their sponsorship agreements so that they can more effectively capture their added value now and in the future.  This is particular evident in the 1998 example in the article where James decided to pursue a revenue-sharing sponsorship deal with smaller players in the video-game market (Microsoft and 2K games) rather than be locked into a traditional fixed deal with video-game giant EA Sports.  Clearly, James recognizes what he brings to the table for each company and makes the specific choice to partner with two firms where he has the leverage to better capture value and extract profits in the short and long-term.

Looking ahead, LRMR may only be the beginning of this transformation of the sports representation industry.  The rapid emergence of Jay-Z’s Roc Nation firm and its signings of marquee athletes like Robinson Cano  shows that even stars from other industry can penetrate the market during this critical transition point.   Innovative start-ups like Fantex — an online registered trading platform that lets you buy and sell stock linked to the value and performance of a pro athlete brand — have  started to enter the fray.   And the industry largest players are reacting by only getting bigger as evident in William Morris Endeavors’ purchase of IMG.    Regardless of who comes out the winner, the world of sports representation will have entered a new era…maybe just in time for Andrew Wiggins to go pro…

Thanks for checking out “The Drive.”  Come back weekly for more articles on sports’ critical role in society, more cases analyzing the sports landscape and more quotes, pictures, people or moments that we hope can provide inspiration or motivation in your life.  You can also follow us on Twitter (@TheDriveSports) or on Facebook (The Drive)!

One response to “New Age, New Age-ncies: Lebron in the Lead”