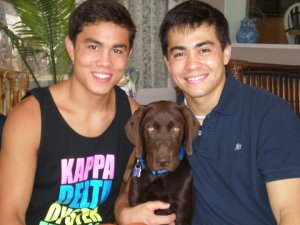 Have you ever looked at someone and seen so much of yourself in them that it’s scary yet, at the same time, been so keenly aware of the small elements of greatness that makes you know they’re capable at succeeding where you came up short or flying where you could only glide? If you have then you might understand how I feel when I look at my younger brother and know in my heart that he’s been gifted with that perfect balance of competitiveness and sportsmanship, creativity and practicality, confidence and respect, external charisma and inner Drive. As I’ve explained it to those that don’t know him – he’s the type of person that you could talk to for 5 minutes and you’d walk away knowing that he’s someone you would always want on your team regardless of the stakes. In fact, that hits upon the element of Jon that I admire most and the one that I believe puts him on whole other planet in terms of talent and potential: he’s clutch.

Just like in the sports world where clutch is the only thing that separates Hall of Famers from “pretty good” players and championships from early playoff exits, I believe clutch is what separates Jon as a true leader and innovator from the rest of us “successful” people. The ability to lift your performance to elite levels whenever it counts most is something that can’t be taught, it’s innate to only a select few. And, in every element of his life from sports to academics to work, Jon always flashed his brilliance in the clutch. In baseball, Jon continually delivered the hit, catch, throw or pitch that had to be done to win. In college, he transitioned through three different majors, weathered a few tough classes and finished with a near perfect 4.0 through his last three semesters to graduate as a top performer in his sports management class at the University of Florida. Even in his professional career, Jon changed from product sales to sports marketing, took the GMAT after a few weeks of studying and scored in the 90th percentile and got into two different sports business MBA programs all within a three month period. He’s consistently great, but extraordinary when he or his team needs it the most. Why wouldn’t you want him on your team? (-Written by Dan Reaves)

Growing up, everyone knew that one kid who seemed like a naturally gifted athlete whose talents carried him into a high school letterman jacket without ever breaking a sweat. He picked up a bat and hit a home run without taking batting practice or skipped the workouts only to run the fastest mile on the team. Dan is not that kid.

Instead, let me tell you about a kid who wore husky jeans and thick, wide rimmed glasses throughout elementary school but still played three different sports. Let me tell you about a kid who decided as a 14 year old to wake up at 5:00am every morning before 8th grade to run and work out simply because making excuses just was not in his DNA. A kid who viewed every obstacle as an opportunity and whose desire to win was exceeded only by his desire to do it the right way.

Where is that kid today? He’s a University of Virginia grad who happened to be the captain of the Varsity Baseball and Football teams in high school and routinely runs in various races throughout the greater Washington D.C. area.

He is the most driven person I have ever met. He could be the world’s greatest professor on mental strength and fortitude. He has used sports to teach me about focus, patience and determination.  But like I said, Dan is not a naturally gifted athlete.

Dan is a naturally gifted leader who happens to be an athlete. (-Written by Jon Reaves)